Undoubtedly it was my father who nurtured my love of music from my earliest childhood. He was a good singer and we would sing together for hours during long family car journeys in my childhood. He became an expert on the music of Mozart, Beethoven and Verdi and through him I developed a love of opera and am still moved to tears by the sheer beauty of the music (far more than the story) of Rigoletto, Parsifal, Don Giovanni and more.

When I was 12 years old, I sang with the Finchley Children’s Music Group – an amazing initiative that provided innumerable young singers for roles in operas and musicals in the West End of London. Through this group I had the tremendous privilege of working over 2 years with Benjamin Britten (whose music I have loved ever since – with its haunting sounds evoking the Suffolk landscape where he lived and worked). The photo below comes from a stage version of Let’s Make an Opera that ran over a Christmas season in London’s West End in 1963 and was later televised. 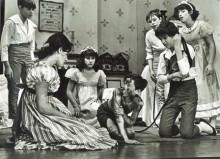 Having a strong singing voice and playing the guitar (even if in a rather pedestrian way) led to a 3-year period in my late teens of busking in the London underground system (the pedestrian tunnel at the Charing Cross end of Tottenham Court Road had some of the best acoustics in London and my ‘take home pay’ each evening was impressive – which may, of course, have been something to do with my mini-skirt!). This income enabled me to pay my way through college. It also led to some unexpected opportunities – including setting a Spanish poet to music and singing the result at an Amnesty International event in London in the late 1960’s.

Nowadays my musical interest is far more broad-ranging and I long ago stopped singing in preference to listening.